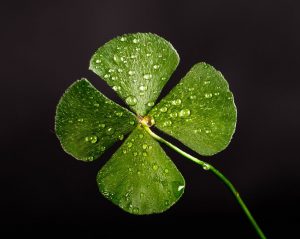 Last week was a crummy week for me. It started rough and went down hill from there. They say bad things come in threes, and I think I now understand why.

It started with a stomach-dropping email. I read it as I was running into the grocery store to quickly pick up some flowers for someone’s birthday. Since it was lunch and I hadn’t eaten that day, I grabbed some veggie sushi rolls to go, too. Rushing and consumed by my negative emotions, I accidentally picked up a California roll, which contains crab…and I’m allergic to shellfish. I was about half-way through my lunch when I realized what I’d done. Happily, apparently the one upside to getting “sushi” from a grocery store deli counter is that they use imitation crab, and I avoided a reaction. Still, it seemed like things were going from bad to worse. That night when one of my kids flushed the toilet and sewer water filled their shower stall, I just nodded. Yep, still unlucky. The next day when it rained unexpectedly on our newly stained deck, I resigned myself to my spate of bad luck.

Then I came across this article (actually, it wasn’t this article, it was another one of the many posts circulating on luck thanks to St. Patrick’s Day, but this one works just as well). Turns out that research suggests that whether or not people feel lucky does in fact impact the kind of experiences they have. Luck isn’t really a thing in itself, but we make it real based on the set of expectations and attitudes we bring into situations based on our belief, and how those expectations shape our perceptions and behavior.

In one study, for example, research participants were grouped according to whether they self-identified as lucky or unlucky. It turns out the lucky folks actually were more likely to find a $50 bill that researchers had planted in their path; the unlucky folks just passed it by. By having the expectation that something positive might happen to them, the “lucky ones” were more aware of their environment, which created a self-fulfilling prophecy.

Some people are more likely to feel lucky than others. People who are extroverted and those who score low on neuroticism (Adjustment, if you are a Hogan assessment fan) are more likely to describe themselves as lucky. People who are more outgoing make more social connections and therefore more opportunities socially than those who are more introverted. And people who are lower on neuroticism tend to be more optimistic. They have the expectation that things are going to go their way. They also tend to be less anxious; anxiety can narrow our focus and create a kind of tunnel vision, so that we miss opportunities that are right in front of us.

Something I’m very interested in lately is the changing nature of the world of work. Compared to any other prior time in human history, the world is experiencing a deluge of information and a pace of change that makes the head spin. Change isn’t easy for humans. It’s stressful, even when it’s desirable. In this environment, we need different and deeper capacities to be successful. Relevant to this topic are two (1) the ability to see opportunity in what appears to be threat and (2) resilience in the face of adversity. People who are literally scanning their environment for the good are more likely to see opportunity when it’s offered, even in the worst of times. And people who look for the silver linings will be more likely to see the gift in difficulty and better able to rebound from challenges.

In my every day life, I tend to be an optimist. I wouldn’t have said I’m lucky, but I like to cultivate the feeling that something amazing is right around the corner. This past week, I let my first “unlucky” experience shift me into an unusually negative mental space. I rushed through experiences and didn’t pay attention to what was going on around me. I stopped looking for the amazing thing that was about to happen and focused only on what was wrong. Not only did this create a situation where even if something good did happen I was likely to miss it or mis-characterize it, I also created a self-fulfilling prophecy of the negative variety.

What the research on expectation here shows us is yet another benefit we can accrue when we choose to be self-aware and situationally aware. When we exercise our ability to manage our emotions and bring ourselves back into a positive state, we open to the possibilities before us.

Are you feeling lucky yet?